Germany is looking back on over 30 years of German Unity and before in 2019 30 years have passed since the fall of the Berlin wall. Today, Germany, Europe and the rest of the world are reflecting on the past in order to look to the future. Your historic tour to Berlin and Leipzig will give you a tangible sense of events in the former GDR, as well as show you what the last several decades have brought with them. In addition, the visit to Potsdam offers you a look back into Prussian history.

Visit the once-divided Berlin – the symbol of German reunification and take an excursion to Leipzig – the "cradle of the peaceful revolution". Discover the sites of the German division and places of the only sucessful and peaceful revolution on German soil on your cultural tour to Germany. We additionally recommend a visit to Potsdam with its magnificent Sanssouci Palace. This tour gives you a profund insight into German history and culture.

Travel tips for your cultural tour to Berlin

Travel tips for your cultural tour to Berlin

In addition to our group tour suggestion we also have further travel tips for your cultural tour:

Here you can find further group tour suggestions that may be of interest for you:

Here you can download our cultural group tour "German Reunification":

You will start your cultural tour in the largest and most important German city - the capital Berlin. Take a first look into the turbulent hustle and bustle of one of Europe's most exciting metropolises. 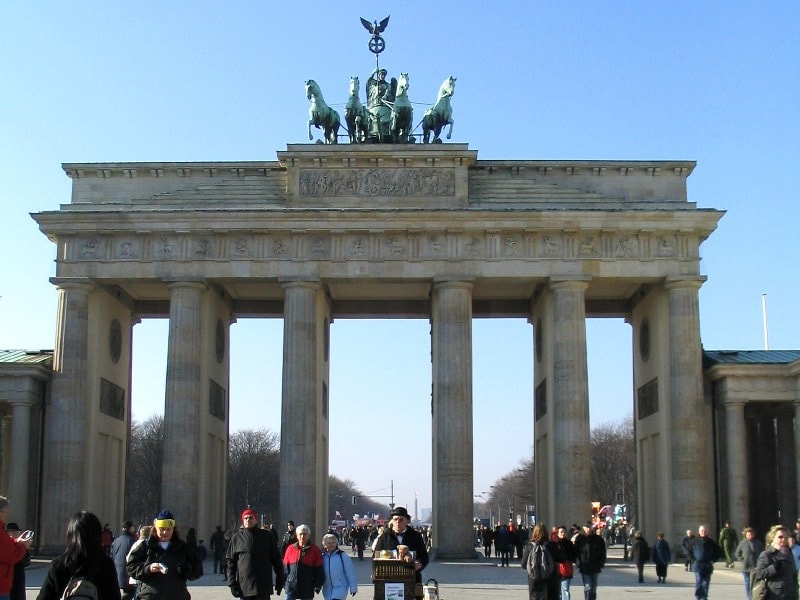 During a city tour you will get to know Berlin. Marvel at the many different facets of the city, take a look at the famous and the unknown. In the once-divided city as a symbol of a divided country, you can still find places and sites that remind you of the division of the city and the country. Especially the Berlin Wall Documentation Center shows in clear and impressive manner the conditions in the divided Berlin in the second half of the last century. Here you get a feeling for what it must have been like to live in Berlin divided by a wall, here the "Iron Curtain" comes alive once again. You should also not miss a visit to the East Side Gallery. This is a permanent open-air-gallery on the longest still remaining section of the Berlin Wall. Here your group can relive German history. 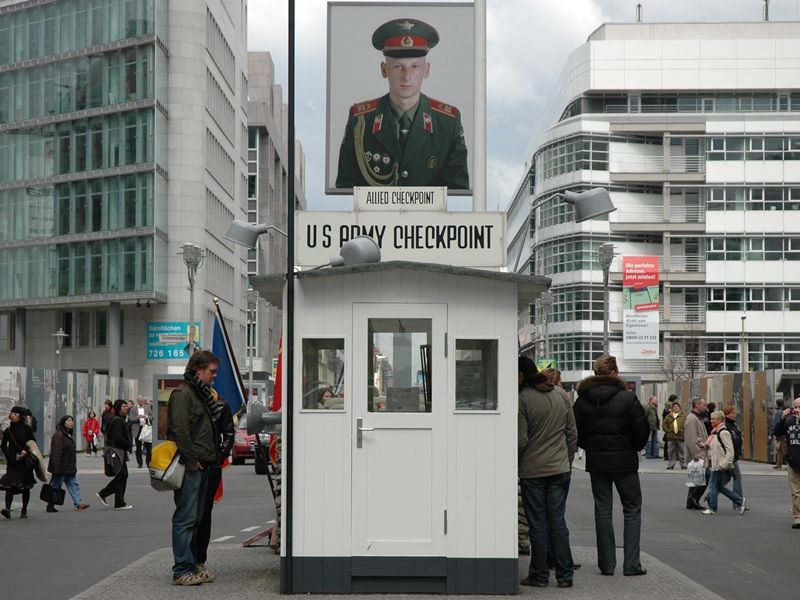 Take the chance to look into life in the GDR. How did look like the everyday life, the private life of the inhabitants and the society behind the wall? What did department stores, shops, schools and classrooms, living roomes, bedrooms and children's rooms look like, such as workplaces, doctors' surgeries, post offices? During a visit to the GDR-Museum you will be able to learn and discover this and more. You can get an insight into life in the GDR of a different kind by a guided tour at Berlin-Hohenschönhausen Memorial. This museum and memorial is located on the site of the main political prison of the former East German Ministry of State Security ("Stasi"). Here you can receive an impression of the methods of the "Stasi" and the conditions of imprisonment of political prisoners including torture measures. 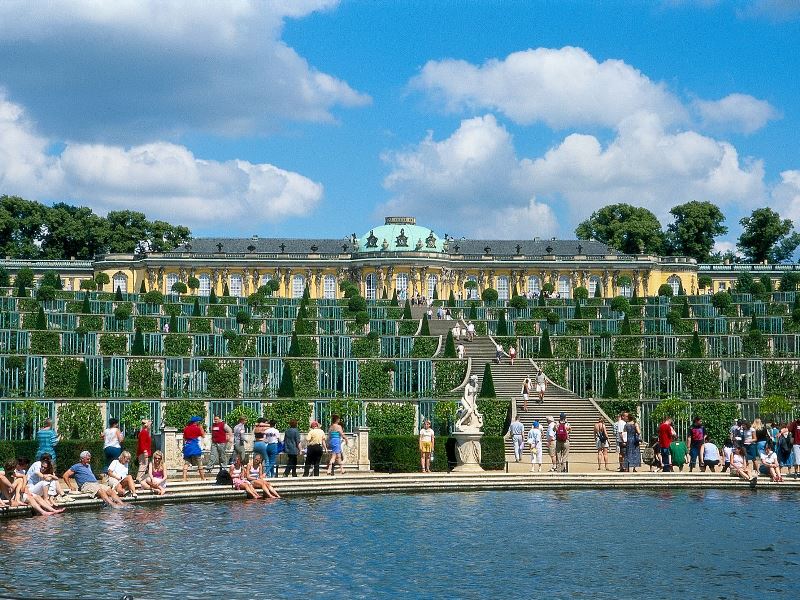 On the 4th day of this historic tour Potsdam will be the centre of attention. The beautiful city just outside Berlin has a lot to offer and is rich in history and culture. You can visit the magnificent Sanssouci Palace ("sans souci" is a French phrase and means "without worry"). This was the summer palace of Frederick the Great, King of Prussia, and is often compared to the Palace of Versailles near Paris. Let yourself be enchanted by the beauty of the park and the palace while immersing yourself in German and European history of the 18th century. After you have convinced yourself of Potsdam's beauty, the tour continues to Leipzig. 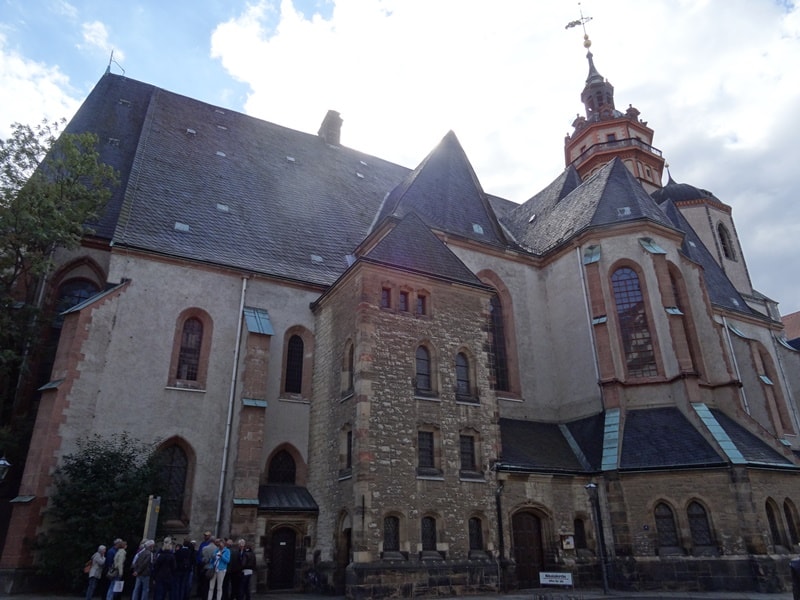 Welcome to Leipzig, the largest city of Saxony. Your guided walking tour is thematically dedicated to the peaceful revolution of 1989, which had its origin in Leipzig. You will see all the important places, e.g. the Nikolaikirche (St. Nicholas Church) and get all the background informations and listen to the stories that finally made history. You also have the option to visit the memorial site "Runde Ecke" (Rounded corner). This museum shows the history, structure and functioning of the Ministry of State Security ("Stasi") in the GDR, which is located in the former seat of the district administration for state security. 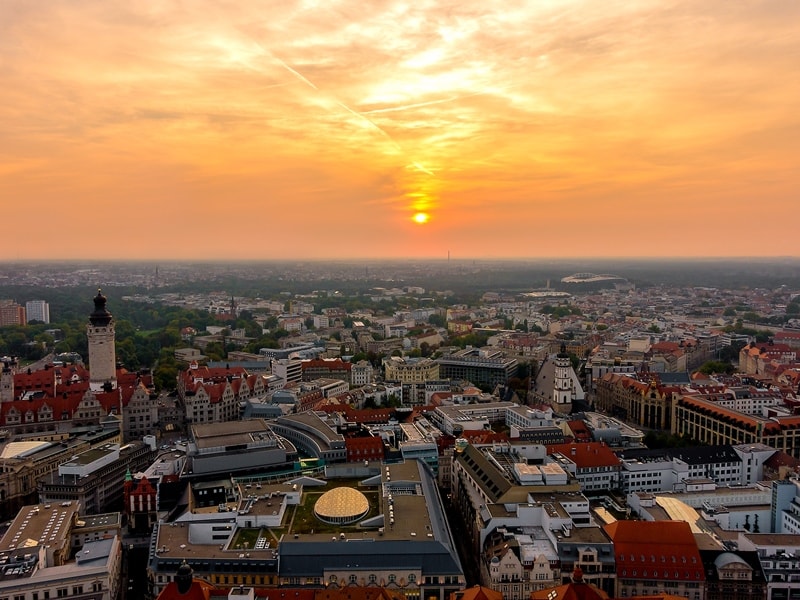 In the St. Nicholas Church you have the opportunity to participate in a prayer for peace, the same prayers with which the end of the "Cold War" was initiated at the 1980s. Furthermore, you should not miss the view of a particulary bizarre part of East German history: The "Government and Emergency Bunker of the Ministry State Security" in Machern near Leipzig. Built to continue the ministry's work in the case of a military strike. Of course during your tour you will have time enough to discover today's Leipzig.

After an impressive cultural tour we wish you a pleasant way home. We hope you have spent a great time in Germany!

This itinerary is only a suggestion for your next historic tour throughout Germany which can be adjusted according to your desires. Whether you draw inspiration from the proposals made in this itinerary or blend them with your own ideas, the AugustusTours team looks forward to putting together your next cultural tour.

This itinerary is only a suggestion for your next historic tour throughout Germany which can be adjusted according to your desires. Whether you draw inspiration from the proposals made in this itinerary or blend them with your own ideas, the AugustusTours team looks forward to putting together your next cultural tour.

This cultural tour  is characterized by its creativity and flexibility, with each itinerary specially tailored to both your requirements and those of your guests. It can be shortened, extended or adapted according to your desires. The prices are based on the programme, group size and hotel class. We are looking forward to your inquiry and provide you with an individual offer for your cultural tour "German Reunification" or for other cultural tours to Germany. We are also happy to organize a city tours in different German cities for your group!

Request a tailor-made offer for your group tour to Germany

All our group tour suggestions can be altered, shortened or lengthened to your specific requirements, so please see them as food for thought rather than a set meal. It would be our pleasure to draw up a tailored quote based on your ideas and expectations – giving you a group tour that will leave you shouting “encore”! Please send us your request for a group tour to Germany. Once you have submitted your request we will work on a tailor-made quote for you.

Being a very experienced and high-performance incoming partner for Germany, we offer you support and advice regarding the realisation of your group travels. Since 1997, we have been working for international travel agents, associations, companies as well as private clients. During all our work, we constantly follow our standard “Expertise. Ideas. Passion”. We are based in Dresden, so we know where your guests travel.

We have numerous itinerary suggestions for you and your group – no matter if you are planning a city break, cultural tour or round trip throughout Germany! The mentioned tours are only suggestions. Please do not hesitate to send us your special ideas and requirements on your next group tour.

We look forward to working with you and would be glad to become your go-to partner for city and cultural tours in Germany!