Dresden’s cultural palace (Kulturpalast) was designed by Wolfgang Hänsch in Bauhaus modernism architecture and is the city’s largest multipurpose hall. One can receive an impression of Dresden’s history as a tiny fisherman’s village up to its development to today’s big city when taking a closer look at the bronze main entrance doors, which were designed by Gerd Jaeger. The mural parallel to Castle Street bears the title “The red flags path” and has been cultural monument since 2001. It was created based on Gerhard Bondzin’s designs. 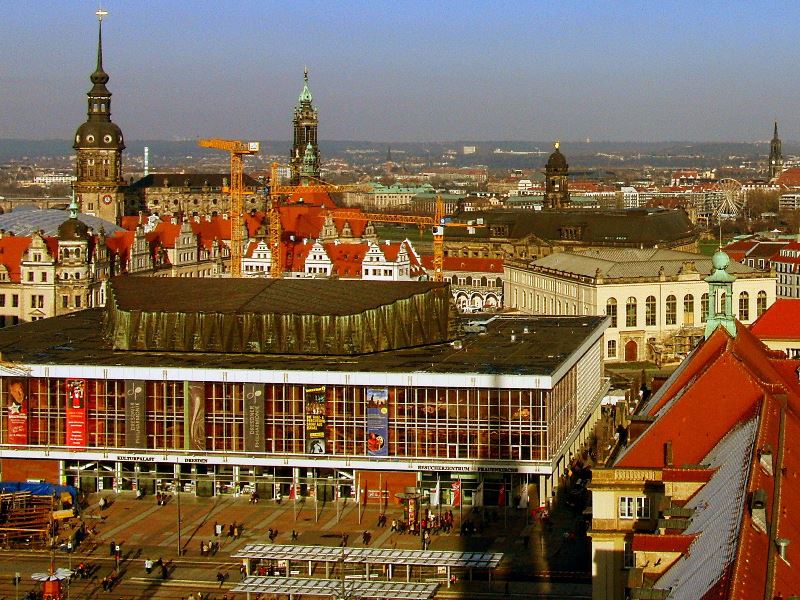 In order to be able to open up the cultural palace daylong and to make its utilisation available for different age- and interest groups, the palace listed reconstruction started in October 2013. The completion for the reconstructed building is supposed to be March 2017. The “new” cultural palace will then be the Dresden Philharmonic Orchestra’s main stage again. Simultaneously, it can be used as a multipurpose hall after it will have been finished.

The palace’s centrepiece will be the new vineyard-shaped hall, which will host approximately 1.785 visitors. The stage will be in the hall’s centre being surrounded by the audience that is supposed to be seated closer to the podium. The hall’s width will be reduced and the acoustic will be noticeably improved. In order for the musicians to hear each other best, a reflector will be attached above the stage. Flexible lift platforms will be installed on the podium to obtain the most versatile utilisation of the concert hall. Furthermore, an organ with 55 stops will be installed by organ builders from the Bautzen company “Eule Orgelbau”. This organ will mainly be suitable for symphonic works of the 19th and 20th century.

The opening concert of Dresden Philharmonic Orchestra in the reconstructed cultural palace hall is planned to take place on 28th of April 2017.

Dresden is never standing still and always worth a visit! Discover the musical history of the city together with your group during a city tour to Dresden for music lovers.