Personalities and meaning of the Bauhaus in Germany

In the past, there used to be many protagonists who dealt with the Bauhaus intending to create a new and modern living environment. The most influential “heads” of the Bauhaus as well as the meaning of the Bauhaus in general will be introduced to you in the following article. Travel along the tracks of the Bauhaus members and get inspired by their ideas and methods – here, you can find some of our suggestions concerning Bauhaus themed group tours.

Not only do renowned avant-garde artists and ambitious junior masters belong to the most important persons of the Bauhaus, but also over 1.250 international students attended the Bauhaus. They all had an lasting influence on the history of the Bauhaus and left witnesses of the past, e.g. fitments and impressive buildings.

Directors of the Bauhaus 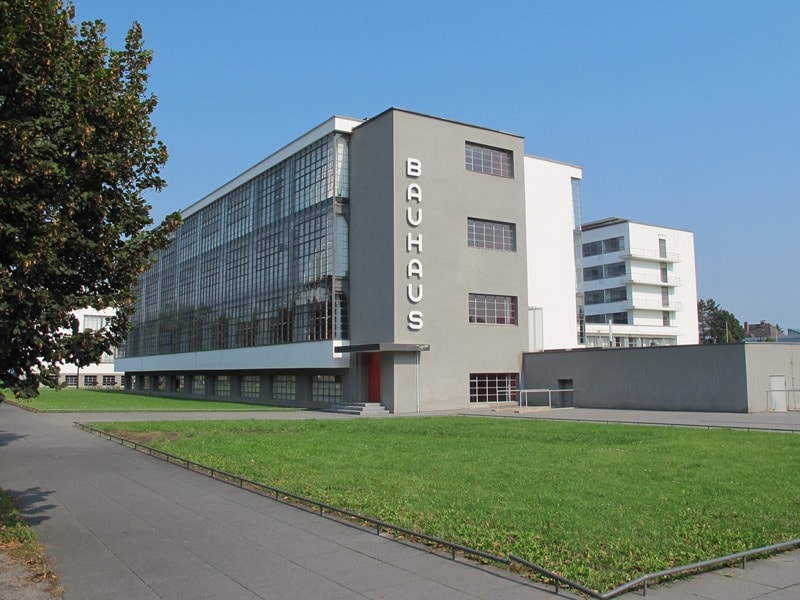 Walter Gropius (*1883 in Berlin; † 1969 in Boston) is considered to be the founder of the Bauhaus. In 1903, he began architectural studies in Munich and Berlin – however, he gave up in 1908. Subsequently, he joined the team of the very famous architect and industrial designer Peter Behrens. In 1910, Gropius became self-employed and started of as an architect and industrial designer as well. He then worked for the German Werkbund and created, being a form designer, wallpapers, serial furniture, car bodies and even a diesel locomotive. Together with Adolf Meyer, he eventually built the Fagus factory, which nowadays belongs to the UNESCO World Heritage in Alfred an der Leine and thus paved his way into architecture. During World War I, Gropius got severely injured along the Western front.

1919, Gropius became the successor of Henry van de Velde as the director of the Grand Ducal-Saxon Academy of Fine Arts in Weimar. He ran this school, which he named “the State Bauhaus in Weimar”, until 1928. Gropius very intensively dealt with the topic of mass residential buildings and even designed various residential projects. From 1928 onwards, he worked as a self-employed architect in Berlin. After the National Socialists had attacked the Bauhaus, he first emigrated to England in 1934 and later on moved to the USA in 1937.

In 1928, the architect and urbanist, Hannes Meyer (*1889 in Basel; † 1954 in Crossifisso di Savosa) took over Walter Gropius‘ leadership of the State Bauhaus in Dessau. To begin with, Meyer, who was a bricklayer, construction draftsman and construction manager, had gained some experience while working for some Berlin architects and finally as a freelancer in Basel. Being a master in his field, he was appointed the master architect at the Bauhaus in Dessau in 1927 where he got dismissed without notice in 1930 due to political reasons.

The German-American architect Ludwig Mies van der Rohe (*1886 in Aachen; † 1969 in Chicago) had studied at the vocational school in Aachen and simultaneously had worked as a bricklayer apprentice in a construction company. Subsequently, he gained experience as a painter in Aachen and moved to Berlin in 1905 where he created House Riehl – his first work. After World War I, Mies van der Rohe also worked on international level.

The global economic crisis also affected Mies van der Rohe in 1929 and thus he accepted the vocation to take over the director’s position in the Bauhaus in Dessau. However, two years later in 1932, the Bauhaus in Dessau was closed due to political reasons. Mies van der Rohe tried to continue the Bauhaus in Berlin as a private institute. Nevertheless, he was forced to give up in 1933 as a consequence of high political pressure. After his journey to the USA, he finally settled in America in the year 1938 and even received the American citizenship in 1944.

Masters and lecturers at the Bauhaus

Meaning of the Bauhaus

The Bauhaus is considered to be one of the most successful cultural exports of Germany. The Bauhaus school is said to be the most meaningful art school of modern age. Especially effective on international level was the exhibition “ 50 years of Bauhaus”, which was organised by the Württemberg art society Stuttgart and presented in the art building by the palace square from 5th May until 28th July 1968. After the “seizure of power” by the National Socialists over 80 members of the Bauhaus left Germany. They carried their ideas, methods and models with them into exile – inter alia to the United States of America.

If you are planning a tour along the tracks of the Bauhaus members on the occasion of “100 years of Bauhaus in Germany”, we would love to support you while planning. Browse through our group tour suggestions “Bauhaus in Weimar” and our round trip "Bauhaus in Germany" which we gladly tailor according to your ideas. However, you are also very much welcome to send us a general request for your upcoming group tour. We are looking forward to you!