Torgau, located in the North of Saxony, is known as the city of Renaissance and Reformation. It holds connections with various other surrounding cities due to Martin Luther and his Reformation. With its castle, Schloss Hartenfels, the city once was the political centre of the Reformation. Luther himself made over 40 recorded visits to Torgau.

"Following in the footsteps of the Reformation" around Torgau

Besides its historical meaning and the beautiful castle, Torgau offers a wide range of diverse excursions. Many cities that had an issue with the Reformation can easily be reached in no time. Here you will find an interesting selection of some destinations for a day trip into the surrounding area of Torgau. If you need more detailed information about these excursion tips, please feel free to contact us! 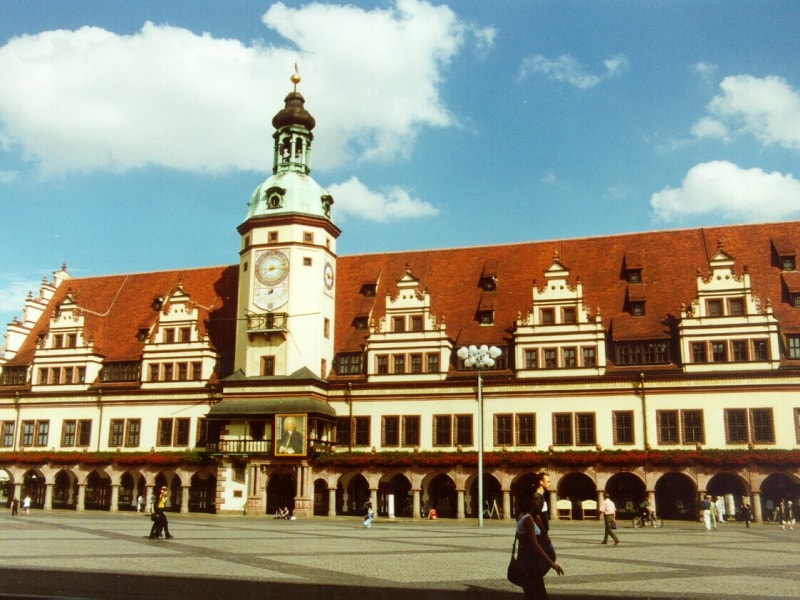 Complement your exploration of the Reformation era with a visit to the places associated with the life and work of Johann Sebastian Bach. You can also visit the Grassi museums or the Monument to the Battle of the Nations. Round off the day with a concert at the Leipzig Gewandhaus, a visit to the opera or an evening of variety or cabaret at one of Leipzig’s many small theatre venues.
Distance from Torgau: about 55 km. 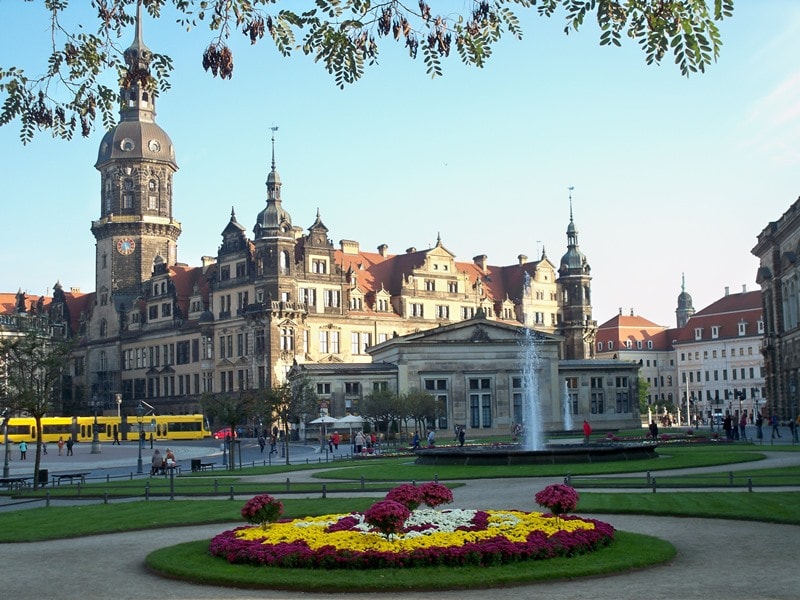 The museums of the Staatliche Kunstsammlungen Dresden house the worldwide largest collection of exhibits from the Reformation period. Within the walls of the Green Vaults, personal items, once belonging to Martin Luther, are on display; his signet ring, his personal weapon – the long knife customarily worn by citizens of the time – and his personal goblet. The Rüstkammer (Armoury) contains precious ceremonial weapons and armour once belonging to the rulers of Saxony. The Gemäldegalerie Alter Meister holds the world’s largest collection of paintings from the Cranach workshop. A selection of tours by coach and on foot offer the best way of discovering this outstanding city of art and culture on the banks of the Elbe river.
Distance from Torgau: about 115 km. 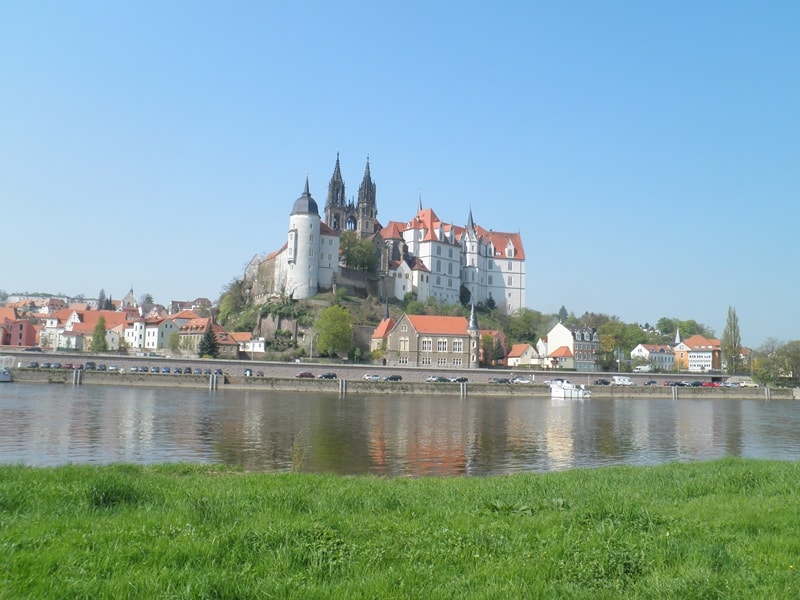 The medieval porcelain and wine town of Meissen is the cradle of the Wettiner dynasty. Dating from the 15th century, the Late Gothic castle of Albrechtsburg towers high above the river Elbe. Stroll through the narrow streets of Meissen, slowly wending your way up to the majestic Albrechtsburg – Germany’s oldest royal palace. Close to the Albrechtsburg is Meissen cathedral, a masterpiece of Late Gothic architecture. Another vital visit during your stay would be to the world-famous Meissen porcelain factory, containing a museum and visitors’ centre.
Distance from Torgau: about 70 km. 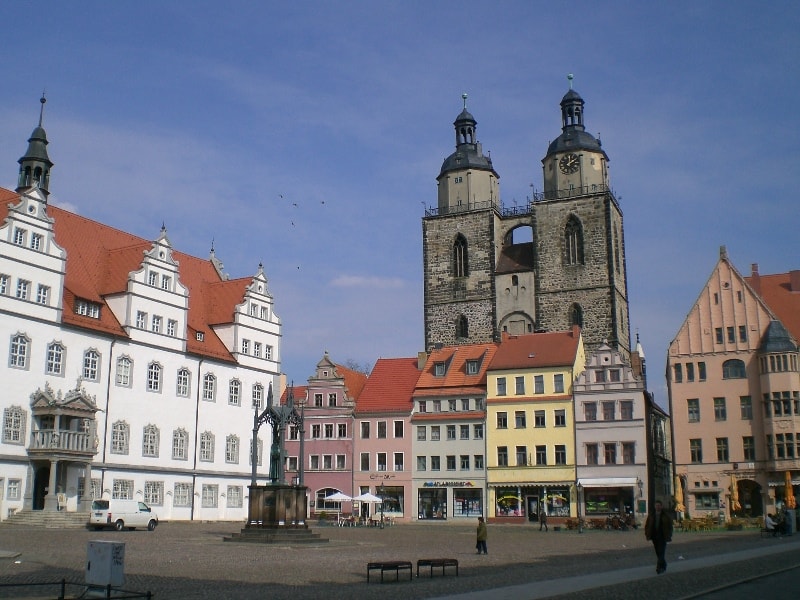 In the 16th century, Wittenberg was one of Germany’s most important political, cultural and artistic centres. Martin Luther lived here for almost 35 years. The houses of Luther and Melanchthon, the town church with its Cranach altarpiece, and the castle church with the famous doors where Luther’s Ninety-Five Theses were nailed, and on which they are now engraved, are among the Luther Monuments listed by UNESCO as World Heritage Sites. A tour of these and other historic places in the town will give a vivid impression of the Reformation period and the circumstances in which the famous personalities of the day lived their lives.
Distance from Torgau: about 50 km.

The painted ceiling in Löbnitz

The painted ceiling in Löbnitz

The Protestant church in Löbnitz has the largest painted ceiling in Germany, created in 1691 by Christian Schilling. Some 168 coffered panels relate stories from the Bible, from the Creation to Moses and Elijah, and from the Annunciation to the Crucifixion and the Resurrection, along with paintings of prophets, apostles and angels. Luther himself is said to have preached here.
Distance from Torgau: about 45 km. 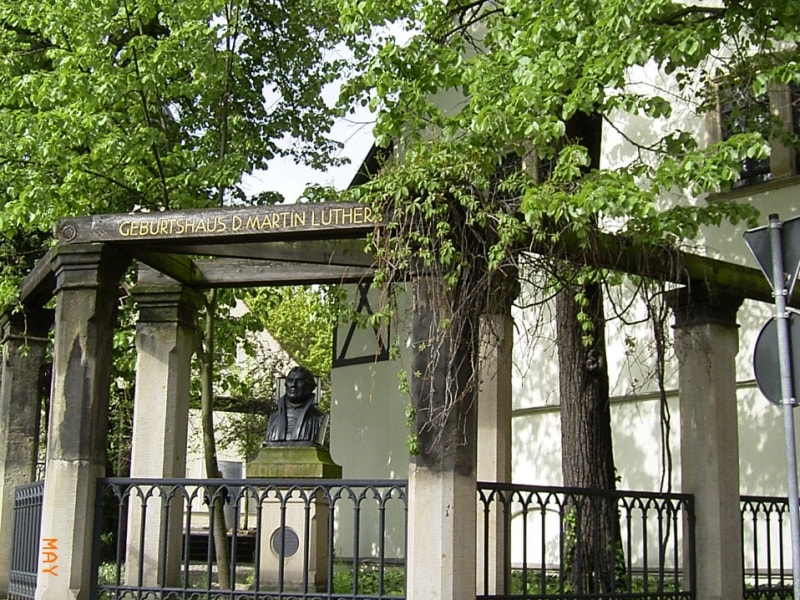 This is where Martin Luther was born and where he died. Both the house of his birth and the house where he died, now a museum, were named UNESCO World Heritage Sites in 1996, and are two of the most important places closely linked with his life and works. A tour of the town will reveal many other traces of the reformer. Furthermore, have a look at St. Annen church where you will have a nice view over the city and where you can find an illustrated bible made out of stone, which dates back to the time before the invention of printing and general literacy.
Distance from Torgau: about 120 km. 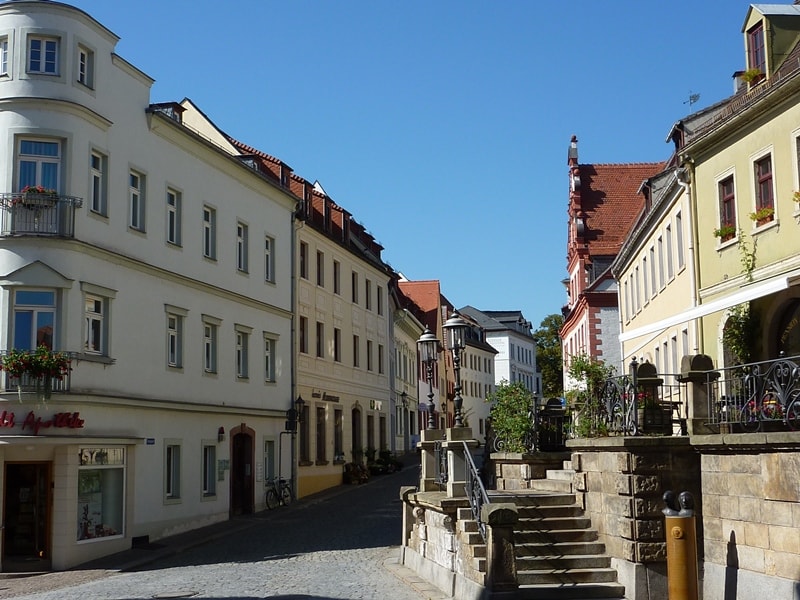 Almost 900 years old, the cathedral is one of the oldest and most interesting religious buildings in Saxony. Martin Luther left traces of his political and reforming activities in the town. As well as medieval art, the highly expressive Crucifixion Group by Professor George Wrba can be seen here. A tour of the cathedral can be combined with a recital on its Jehmlich organ.
Distance from Torgau: about 34 km.