The narrow-gauge railways of Saxony

The annual Dresden Steam Engine Festival in April is a must go for every railfan. But Saxony has a lot more to offer regarding nostalgic railways, as numerous narrow-gauge railways are on the road, too. They drive on smaller rails to special places and pour on the nostalgic charm while chuffing through the landscape. Here you will find an overview of some Saxon narrow-gauge railways. Experience the charming narrow-gauge railways of Saxony and get the real feeling of magic while taking an idyllic tour by steam.

Traveling through the Steam Engine Paradise of Saxony

... from Radebeul East to Radeburg 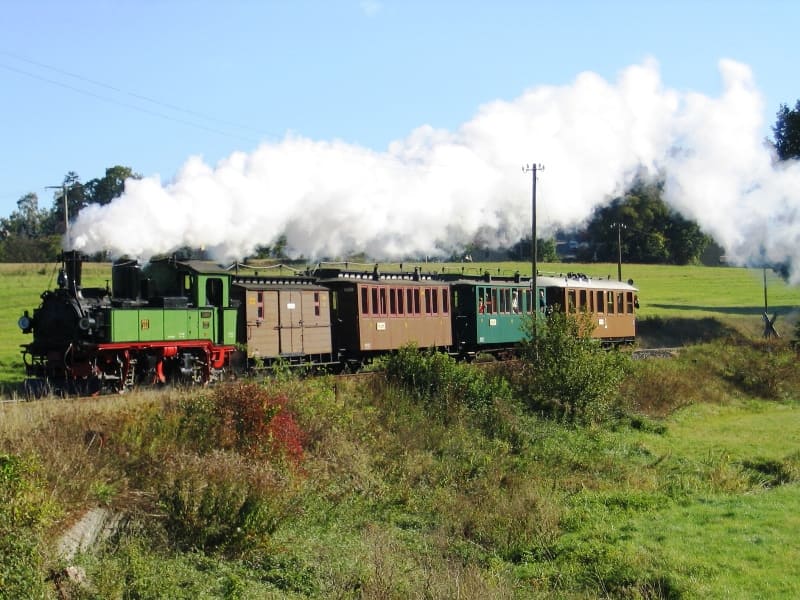 In the east of Dresden, one can hear quite often the distinctive chuffing when the Radebeul-Radeburg railway once again pushes her way through the Lößnitzgrund. Starting station of the Lößnitz Dachshund (Lößnitzdackel), as the railway is fondly called by the locals, is Radebeul. Enjoy the unique view of the vineyards of Radebeul and the traditional winery of Hoflößnitz on this ride to Radeburg, before plunging into the the forest of the Lößnitztal. From Friedewald to the well known place Moritzburg, the former hunting château of the Saxonian King August the Strong, which definitely deserves a visit, through various smaller villages to Radeburg, which is the final stop of the Radebeul-Radeburg railway.

The construction of the Radebeul-Radeburg railway was decided in 1879. After a short period of five years, the narrow-gauge railway was inaugurated. Along the 16,55 kilometres, the railway crosses 19 bridges and runs through various picturesque villages and dreamy forestland. A trip with the Radebeul-Radeburg railway is always, in every seasons of the year, worthwhile. A rail ride through the snowy winter forest, however, is particularly charming.

Credits:
Traditional steam train of the Lößnitzgrundbahn in Friedewald with 99539 © AugustusTours 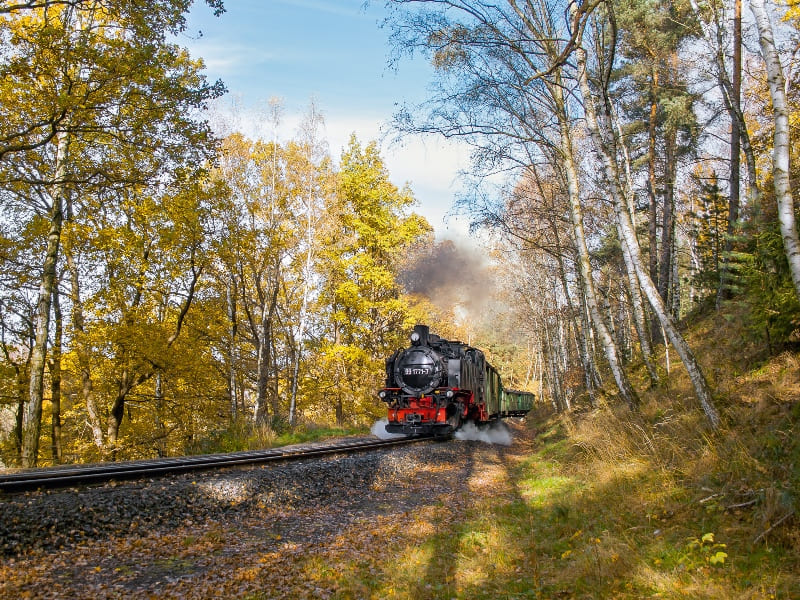 The Weißeritz Valley railway is one of the oldest steam operated narrow-gauge railways in Saxony, which is still in use and accessible for public. Since 1882, the route through the idyllic Weißeritztal and the picturesque Eastern Ore Mountains belongs to the most beautiful railway lines in Europe.

Freital, the starting point of the Weißeritz Valley railway, is located near the Saxon state capital Dresden. From here, the railway weaves its way straight through the wild and romantic Rabenauer Grund going past Rabenau and Spechtritz. The landscape of the Eastern Ore Mountain is very varied; this route leads again and again through mystical pieces of woodland. Through Malter, alongside the renowned river dam and the heath of Dippoldiswalde (Dippoldiswalder Heide), the arrival station of the idyllic narrow-gauge railway will be reached in Kurort Kipsdorf.

The Weißeritz Valley railway invites you to a 26 kilometers long nostalgic ride through the Eastern Ore Mountains. This railway is the ideal place to explore the most beautiful cycle and hiking areas of the surroundings of Dresden. 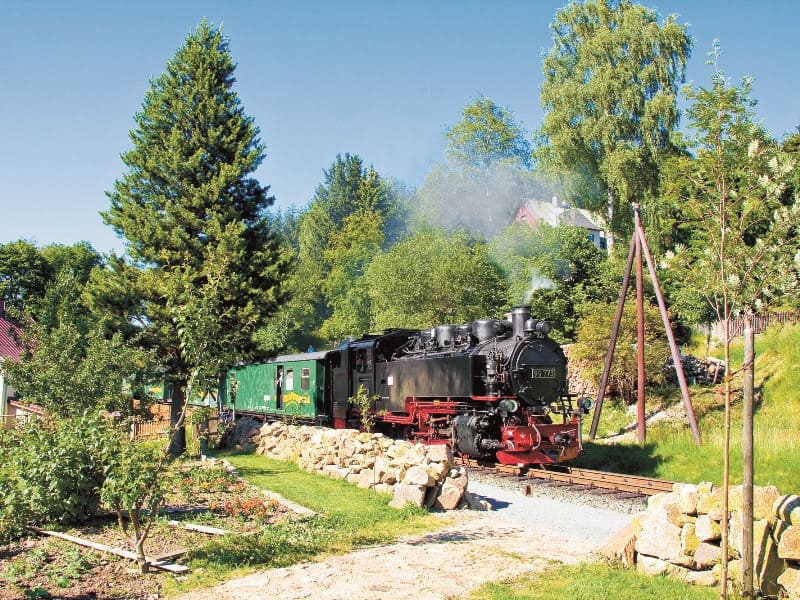 The Fichtelberg railway will take you to the highest city in Germany, the placid mountain spa resort Oberwiesenthal. The idyllic journey starts at the change-of-gauge station Cranzahl. From here the narrow-gauge railway winds its way up towards the Sehmatal. Then it continues to the picturesque village Neudorf, which became known for the production of incense cones. The Fichtelberg railway is chuffing its way from the Kretscham-Rothensehma station to Unterwiesenthal. Shortly before the narrow-gauge railway arrives in its destination in Oberwiesenthal it goes across the 110 metres long and 23 metres high Hüttenbachtal viaduct, which makes this steam railway trip a very special experience!

As early as 1870, there were first considerations to build a new rail connection on the Fichtelberg. 24 years later the building permission was obtained. Since 1897, when the small narrow-gauge railway took up its rail operations, it has been cresting the 17,35 kilometers to the top of the Fichtelberg on a daily basis and transports hiker, winter sport enthusiasts and holidaymaker to the mountain spa resort Oberwiesenthal.

... from Zittau to the Mountain Spa Resorts Oybin/Jonsdorf

Since 1890, the Zittau–Oybin–Jonsdorf railway runs daily between the city of Zittau and the placid mountain spa resorts Oybin and Jonsdorf. „The train without haste“, as the Zittau–Oybin–Jonsdorf railway is fondly called by the locals, departures from the main train station in Zittau. The train takes you from Olbersdorf to the station in Bertsdorf, where you can decide whether you want to go to the mountain spa resort Oybin or to Jonsdorf. Both places are only 6 kilometres apart from one another, which provides a great opportunity to do a hiking tour from one place to the other in order to get to know both track sections of the narrow-gauge railway.

Enjoy a nostalgic ride through the wonderful town Zittau and its great surroundings in this lovingly restored vehicles!

Since 1885, the Döllnitz railway has been connecting the rural surroundings of Leipzig to the railway system. The beautiful narrow-gauge railway along the River Döllnitz constantly enchants its guests with a delightful route passing many places worth to visit. The Döllnitz railway sets off in Oschatz and drives through a picturesque landscape to a place called Mügeln, where a visit to the once largest narrow-gauge railway station is highly recommended. Gossen is the destination of this train ride. Here you can visit the light railway exhibition (Feldbahnschauanlage). People who enjoy hiking appreciate the untouched nature and charming landscape of the area, which is also known for their fruit cultivation, and usually like to use the narrow-gauge railway to reach their hiking destination.

Not only the landscape, through which the Döllnitz railway finds her way, is impressive. The history of this railway is not less remarkable, as the Döllnitz railway looks back on a very long tradition of transporting mining goods by narrow-gauge railways. Till this day, kaolin is being mined in the areas around Mügeln and Kemmlitz. Nostalgia- and railfans should not miss the opportunity to go on a steam operated narrow-gauge railway trip.

... in the Great Garden in Dresden

During a walk in the Great Garden in Dresden you can´t miss to hear and see the Park Railway. A high whistle is blown and soon you can see the small train wriggle through Dresden´s biggest park. A ride with the Park Railway should not be missed during a visit to the Great Garden. For more than 60 years the narrow-gauge railway is in operation and has become a very popular leisure option in Dresden. At the stations it is clear that the children have the final say here! Schoolchildren of 4th and 5th grade provide vital functions as conductors, dispatchers or barrier guards. On the large round of 5.6 kilometers, the railway passes beautiful sights of the Great Garden as the zoo, the Carola lake with castle and the palace. 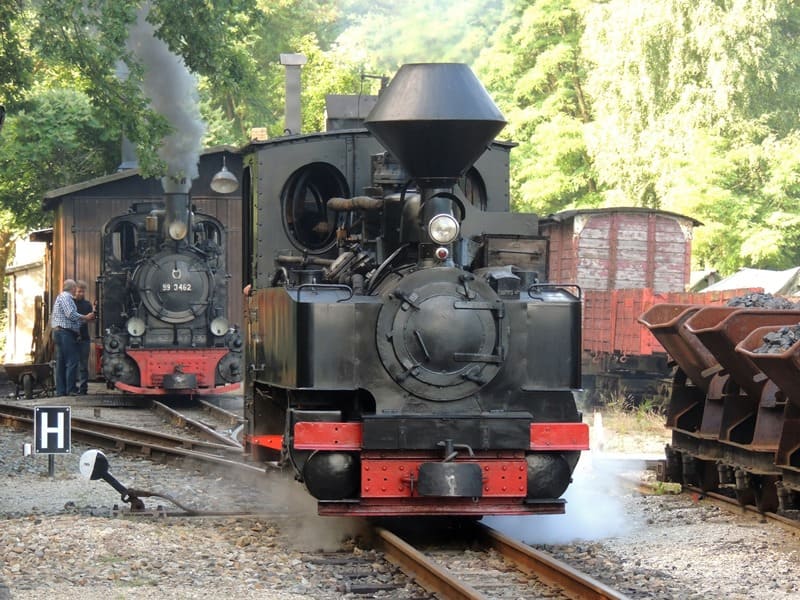 The Waldeisenbahn Muskau (WEM) is a Saxon narrow-gauge railway with a gauge of 600 mm. It was once laid out as a horse-drawn railway in 1895 by decision of Count Hermann to develop the forests, to mine raw materials and to support the emerging industry around Muskau and Weißwasser. In the same year the first two steam locomotives were purchased. Today, the museum railway is the largest in Germany – with a track gauge of 600 mm.

The route from Bad Muskau via Weißwasser to Kromlau is particularly scenic, linking two wonderful landscape parks. Both diesel and steam locomotives are used in public transport operations. On selected days it is possible to travel on a special train along the so-called Tonbahn. The special train with a historic diesel locomotive takes you from Weißwasser-Teichstraße station to Schwerer Berg terminal. The three-hours round trip leads through the Muskauer Faltenbogen Geopark and past the Nochten open-cast mine.

If you would like to visit Saxony and see some of the mentioned, narrow-gauge railways, please feel free to check out our special interest tours on the subject of Steam Trains.

For individual travellers we have set up an package holiday to Dresden in April, when the great Dresden Steam Engine Festival takes place. Click here to see our Steam Train Tour to Dresden.

For clubs and groups of more than 10 persons we have set up an itinerary to visit the Dresden Steam Train Festival. If you are interested in planing a group tour at a different time you might find our themed tours Steam Train Tours for groups interesting.