Following the Romanesque Road throughout Saxony-Anhalt

Mighty cathedrals tell us about the fear of God and of worldly power. Imposing castle walls give us an impression of the lives of the former knights. Romantic monastery complexes keep the secrets of medieval monks. A worthwhile trip is a visit to the original places of medieval life in the heart of Germany, in Saxony-Anhalt.

The city is dominated by the Magdeburg Cathedral with the grave of Otto the Great, the founder of the Holy Roman Empire of the German Nation. You can also visit other examples of Romanesque architecture such as the Monastery of Our Lady, the Catholic Cathedral St Sebastian and the Parish Church St Petri.

The highlight of the city is the Cathedral and Cathedral treasures of Halberstadt. The most important exhibit is the group of triumph crosses of the late Romanesque period.

Here you can visit the open-air museum of the Imperial Palace Tilleda. The palace in sight of the Kyffhäuser which was first mentioned in 972 shows the life at a royal court of more than 1000 years. In the open-air museum the palace has been partly reconstructed displaying the structural development of the main parts of the site. 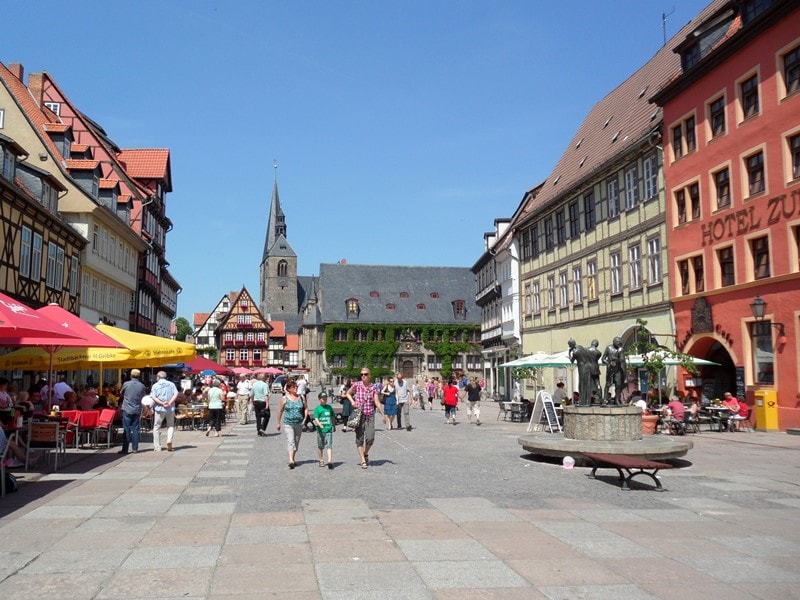 In Quedlinburg you can discover eight centuries of half-timbered houses and architecture. Another highlight is a visit to the Collegiate Church St Servatius. In the collegiate church we will see the graves of the first German royal couple, Henry I and his wife Mathilda. Continue to the Basilica St Wiperti with a crypt, which has been preserved until today.

Visit Querfurt to explore the Great Castle, whose surface area is seven times the size of that of Wartburg Castle. In the Middle Ages the castle was the center of a small independent principality. With its three imposing towers, two circular walls and the strong fortifications, the castle is one of the oldest, largest and best preserved castles in Germany.

The most important sight in Naumburg, the Cathedral St Peter and Paul, is one of the most famous buildings at the Romanesque Road, especially because of the figures of the church founders from the 13th century.

You can reach Freyburg by a boat trip from Naumburg. Here you can visit the immense complex from Neuenburg Castle that was established in 1090. The twin chapel is a real treasure.

Continue you journey throughout Saxony-Anhalt and visit Merseburg where the Cathedral St Johannes und St Laurentius is located. The hall crypt from the early 11th century gives evidence to early Romanesque architecture. Of significance is the oldest German portrait monument, the bronze panel depicting Rudolf of Swabia (1080).

If you are interested in an individual offer for a group tour please contact us! Whether you draw inspiration from the proposals made or blend them with your own ideas, the AugustusTours team looks forward to putting together your next group tour.